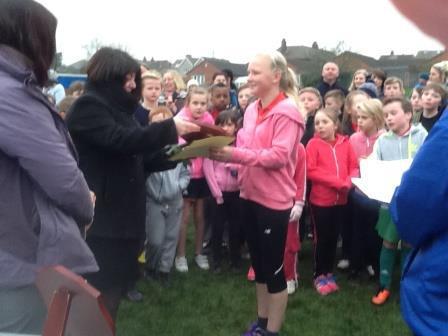 On Wednesday 19th March a group of Year 4, 5 and 6 children took part in the Bedworth Primary Schools Cross Country Championship held here at St Francis. It was the first time that we had hosted the competition and it was a resounding success! Schools from all across Bedworth attended with fantastic performances from all of the children involved.

Our St Francis team consisting of Lauren Haywood, Oran Nolan, Imogen McGee, Sam Burgham, Neavy Nganga, Liam Murphy, Hayley Nganga, Mackenzie Nixon, Kelis Viola, Dominic Simmons and Daniel Skidmore were a real credit to our school. The race was run around the school grounds and out into the parkland behind – it was a long race, with rough terrain, hills and muddy puddles for them to contend with but they did so with enthusiasm, commitment and a great sporting attitude that they should be proud of!

The competition was fierce in both the boys and girls races but the girls’ race was won by our very own Lauren Haywood with Imogen McGee finishing well to claim 5th position! There were excellent performances in the boys race as well with a 5th place finish for Oran Nolan who finished the race with a brilliant sprint up the final hill.

Mackenzie, Liam, Sam and Dominic also qualified for the next round of competition after half term with excellent top 20 finishes. Neavy, Hayley, Kelis and Daniel all narrowly missed out on qualifying but should still feel very proud of their top 30 finishes.

Well Done to all involved.